Share this page
Posted by technotifications in Climate, Society, General on March 14, 2016 - 29-year-old Danny Kornelio is an outgoing oceanographer with the Institute of Fishery and Marine Sciences in Toliara, Madagascar. Fascinated by coral reef ecosystems, he has observed, for many years, the pressures on the Toliara Great Reef and is troubled by the changes he has seen.

“Now, with the difficulty of daily life, people are not aware that biodiversity is deteriorating around them,” he asserts. “Instead, marine resources are often overexploited. Change is here. It is a sometimes misunderstood change, a disruption to their daily life, which presents itself as the gradual decline in agricultural yields due to the scarcity of rain, the changing weather, the rainy season arrives later and later.”

Last year, Danny helped to organize a large gathering of youth seeking action on climate change in Antananarivo. 3500 youth from Madagascar and all across the Indian Ocean, including Comoros, Mauritius, and Reunion, came to Antananarivo to participate in the 11th Conference of Youth. They held side events, expositions, debates, led a large climate march through the streets of the capital and discussed climate change matters and how youth can influence social and government leaders to take the correct action on climate change. After the conference he helped to create the Réseau Climat Océan Indien, a youth organization dedicated to bringing the countries of the Indian Ocean region together to positively act on climate change. Danny is now the organization’s General Secretary.

“By being involved with these environmental associations, I can help raise awareness on environmental protection. Seeing people invest in their environments for the protection of biodiversity is a joy for me. ”

Commitment comes from within Danny says that youth must be innovative to have an impact, because factors like a lack of funding can limit their ambition. In his association each member contributes a little bit towards paying for group activities, but they also find new ways to make their message heard.

“To face these challenges, we tried to make ourselves heard via social networks and contacts to support us in our actions. By bringing many people together for one cause we can have the combined strength of everyone to face challenges.”

“Young people have the will to make change happen. They are able to mobilize quickly and in large numbers for the defense of a common environmental cause. To turn things around, young people should always have the desire to affect the decision making process, and to look to make the best possible future for our world.” 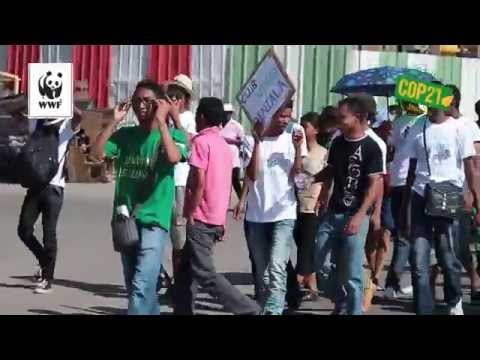