There is a saying in Madagascar that states, “Childhood is the ground on which we walk our entire lives”.

It is a perspective that has motivated people from the village of Manombo to take action to remedy a problem that is threatening their futures.

Manombo is a village of just over a hundred people located 35 kilometres from Maintirano, in the region of Melaky, a distant outpost on the western shores of Madagascar.

Since September 2015, these men, women and children have become key players in mangrove conservation of the west coast of Madagascar. They draw their livelihoods from the wetlands and they saw that human impacts were beginning to drain those livelihoods away.

Mr. Garçon, a village elder, summarizes the village’s perspective on the situation, “Absolutely everything we do depends on the forest. We, the Vezo people, fishermen, and even those who farm the land, live from crab fishing in the mangroves. That’s why it’s important. We must take care of mangroves today for our grandchildren. If we can restore the forest, we can preserve it and pass it on to our children.”

They chose to participate in a reforestation campaign led by the WWF Madagascar office in Maintirano. Between November and January 2016, they planted about 9,000 propagules, mangrove seedlings, to restore degraded forests around their village. Many Benefits from Mangroves

The mangroves of the coastal Melaky Region are among the most intact of Madagascar. The region is part of the landscape Manambolo Tsiribihina, the west coastal region where WWF Madagascar operates in Melaky and Menabe, with a focus on mangrove protection, reforestation and community development. Mangroves form a rich and productive ecosystem but are vulnerable to various threats such as climate change impacts or intensive clearing.

The mangroves also play a vital role in coastal protection: they prevent erosion and protect the coastline during storms. Coastal ecosystems with healthy, intact mangroves have greater resilience to climate change. The mangroves also provide a habitat, breeding area and feeding ground for many species of fish, shrimp and the mangrove crabs that families in Manombo depend upon.

IN 2015, WWF established a large Community Restoration project in the area. The aim is to preserve the biodiversity and ecological services of mangroves in the region, while providing socio-economic benefits to communities. The project has received widespread support from the surrounding communities. Technical Officer for WWF in the Melaky region. 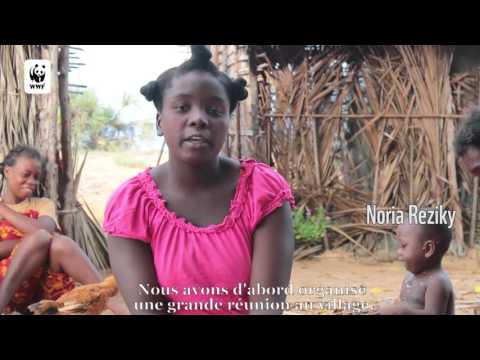